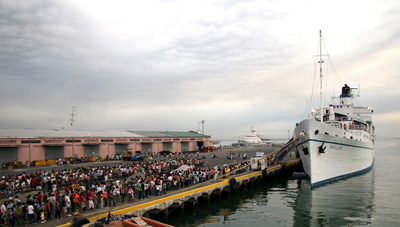 Doulos was purchased in 1977 and sold in March 2010. Constructed in 1914, Doulos was recognised in the Guinness Book of World Records as the world's oldest active ocean-going passenger ship. Over the 32 years she was in service with GBA Ships, Doulos welcomed over 22 million people on board during 601 ports of call in 108 countries. During that time, the vessel covered more than 350,000 nautical miles - equivalent to sailing around the world 16 times!
Read more about Doulos

Logos II was purchased in 1988 and completed her service with GBA Ships in July 2008. During her 20 years of service, over 11 million visitors were welcomed on board for tours, programmes and visits to the floating book fair. With stops in over 350 ports of call, this unique ship visited 86 countries and territories in Africa, the Americas, Europe, the Near East and many island nations.
Read more about Logos II

GBA Ships' pioneering first ship, Logos, was purchased in 1970. Over a 17-year period, more than 6.5 million visitors came to Logos during 408 ports of call in 108 countries. In 1988, Logos ran aground in atrocious weather conditions in Tierra del Fuego, hitting rocks in the Beagle Channel between Argentina and Chile. Though the ship could not be saved, not a single crewmember was lost or even injured!
Read more about Logos